We are in that period of the year in which there is a massive use of pumpkins, spider web decorations, and monsters appear wherever your sight can arrive. Yes, it is Halloween again!

Halloween, as we know, is celebrated all over the world in many different ways and names.

Today we would like to illustrate the one that we consider the most cheerful and joyous of the entire world: el Día de los Muertos in Mexico.

It is a Mexican holiday celebrated throughout Mexico, in particular the Central and South regions. The multi-day holiday focuses on gatherings of family and friends to pray for and remember friends and family members who have died, and help support their spiritual journey. In 2008, the tradition was inscribed in the Representative List of the Intangible Cultural Heritage of Humanity by UNESCO.

Prior to Spanish colonization in the 16th century, the celebration took place at the beginning of summer. Gradually, it was associated with October 31, November 1 and November 2 to coincide with the Western Christian triduum of Allhallowtide: All Saints’ Eve, All Saints’ Day, and All Souls’ Day.

The festival that developed into the modern Day of the Dead fell in the ninth month of the Aztec calendar and was celebrated for an entire month. The festivities were dedicated to the goddess known as the “Lady of the Dead”, corresponding to the modern La Calavera Catrina.

People go to cemeteries to be with the souls of the departed and build private altars that contain the favorite foods and beverages, as well as photos and memorabilia, of the departed. The intent is to encourage visits by the souls, so the souls will hear the prayers and the comments of the living directed to them. Celebrations can take a humorous tone, as celebrants remember funny events and anecdotes about the departed.

Plans for the day are made throughout the year, including gathering the goods to be offered to the dead. During the three-day period families usually clean and decorate graves with ofrendas (altars), which often include orange Mexican marigolds called cempasúchil (originally named cempoaxochitl, Nāhuatl for “twenty flowers”).

In modern Mexico the marigold is sometimes called Flor de Muerto (Flower of Dead). These flowers are thought to attract souls of the dead to the offerings. Toys are brought for dead children (los angelitos, or “the little angels”), and bottles of tequila, mezcal or pulque or jars of atole for adults.  Some families have ofrendas in homes, usually with foods such as candied pumpkin, pan de muerto (“bread of dead”), and sugar skulls. Pillows and blankets are left out so the deceased can rest after their long journey.

In some parts of Mexico, such as the towns of Mixquic, Pátzcuaro and Janitzio, people spend all night beside the graves of their relatives. In many places, people have picnics at the grave site, as well. The traditions and activities that take place in celebration of the Day of the Dead are not universal, often varying from town to town. 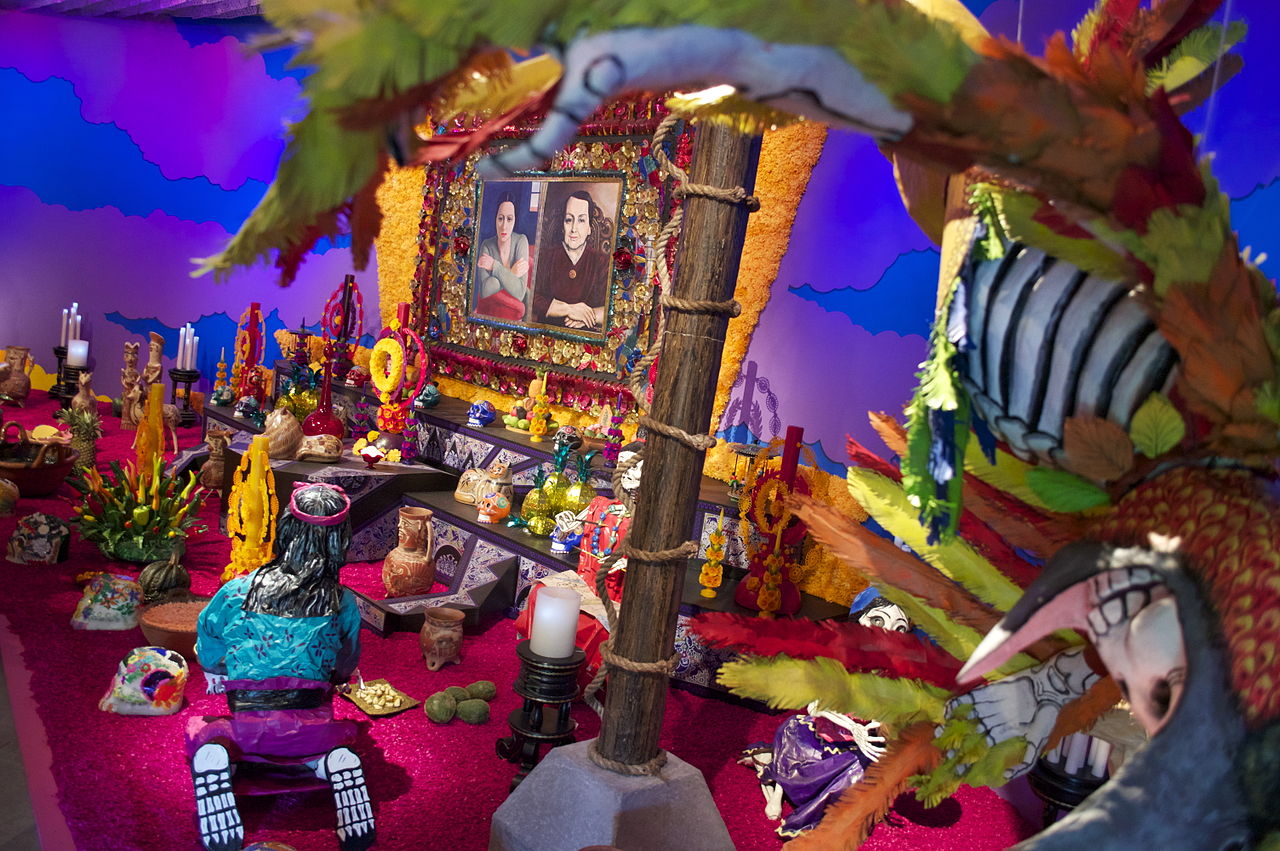 Last year in Mexico City, el Día de los Muertos celebrated the festivity for the first time with a parade. The James Bond movie, Spectre inspired the government to sponsor the event.

We think this is a very particular way of celebrating the deads but also very interesting and fascinating. What do you think about it? Would it be amazing to go there and see everything in person?