Yesterday it was the 91th birthday of the Queen Elizabeth, maybe the most famous living queen in the world and we wish to told you about her story.

Elizabeth II -Elizabeth Alexandra Mary- was born the 21th April 1926. She is the most long-lived queen that UK has ever had. Elizabeth was born in London; she is the eldest child of the King George VI and Queen Elizabeth. In 1947, she married Philip, Duke of Edinburgh, a prince of Greece and Denmark, with whom she has four children.

During her grandfather’s reign, Elizabeth was third in the line of succession to the throne, behind her uncle and her father. When her grandfather died in 1936, her uncle succeeded as Edward VIII. Later that year, Edward abdicated. Consequently, Elizabeth’s father became king, and she became heir presumptive. If her parents had had a later son, she would have lost her position as first-in-line.

She Met her future husband in 1934 and 1937 and began to exchange letters in 1939. She was 21 years old when their engagement was officially announced on 9 July 1947. The engagement was not without controversy; Philip had no financial standing, was foreign-born (though a British subject who had served in the Royal Navy throughout the Second World War), and had sisters who had married German noblemen with Nazi links.

Before the marriage, Philip renounced his Greek and Danish titles, converted to Anglicanism, and took the surname of his mother’s British family. Before the wedding, he became Duke of Edinburgh. They married married on 20 November 1947 at Westminster Abbey.

During 1951 her father’s health declined and Elizabeth stood a lot in for him at public events. On 6 February 1952 king George died and consequently she accessed to the throne. She chose the regnal name Elizabeth. She became officially Queen on the 2nd June 1953. 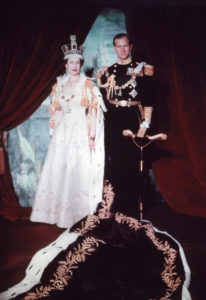 From Elizabeth’s birth onwards, the British Empire continued its transformation into the Commonwealth of Nations.  In 1953, the Queen and her husband embarked on a seven-month round-the-world tour, visiting 13 countries and covering more than 40,000 miles by land, sea and air. During her reign more than 20 countries gained independence from Britain as part of a planned transition to self-government.

Since Elizabeth rarely gives interviews, little is known of her personal feelings. She does have a deep sense of religious and civic duty, and takes her coronation oath seriously. She is patron of over 600 organisations and charities. Her main leisure interests include equestrianism and dogs, especially Corgis. 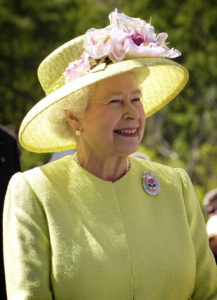