Christmas is, for sure, the most celebrate holiday around the word. According to the different religions and beliefs, Christmas in celebrated in different ways but even among believers of the same religion and of the same nation you can find different costumes.

Today we are going to see the difference between Italy and Uk.

One of the most important ways of celebrating Christmas in Italy is the Nativity scene.

Using a crib to help tell the Christmas story was made very popular by St. Francis of Assisi in 1223. The previous year he had visited Bethlehem and saw the stable where it was thought that Jesus was born. A lot of Italian families have a Nativity crib in their homes.

The city of Naples in Italy is world famous for its cribs and crib making. These are known as ‘Presepe Napoletano’ (meaning Neapolitan Cribs). The first crib scene in Naples is thought to go back to 1025 and was in the Church of S. Maria del presepe (Saint Mary of the Crib), this was even before St. Francis of Assisi had made cribs very popular!

Having cribs in your own home became popular in the 16th century and it’s still popular today (before that only churches and monasteries had cribs). Cribs are traditionally put out on the 8th December. But the figure of the baby Jesus isn’t put into the crib until the evening/night of December 24th!

Nowadays, next to the Nativity scene you can find the most famous Christmas tree. 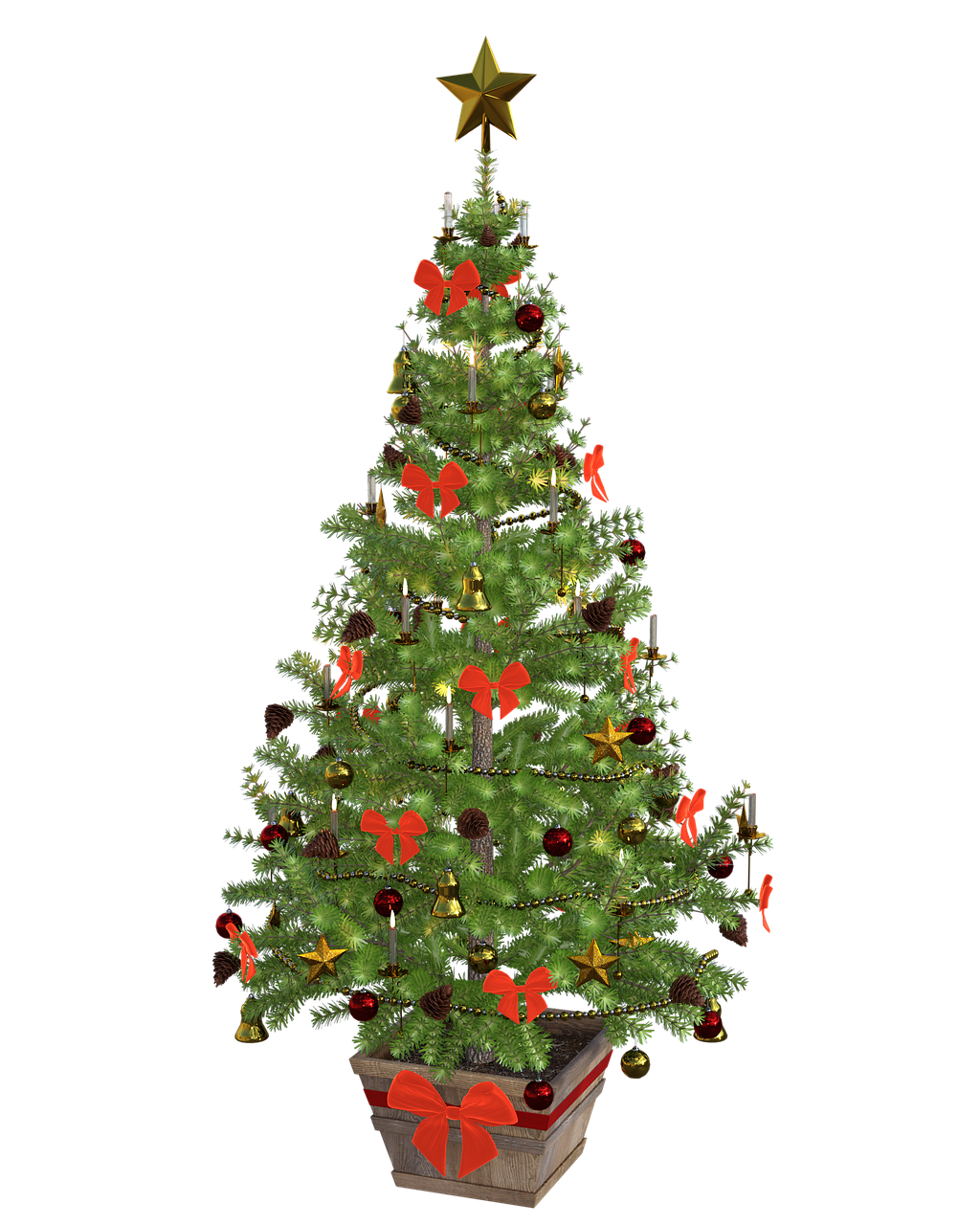 With the advent of Christianity the use of the Christmas tree was also affirmed in Christian traditions, even if the Church, at the beginning forbade its use by replacing it with holly, to symbolize with the thorns the crown of Christ and with the berries the drops of blood coming out of the head.

The modern Christmas tree was developed in early modern Germany. The tree was traditionally decorated with “roses made of colored paper, apples, wafers, tinsel, sweetmeats”. The apples and round ornaments are supposed to represent the fruit of knowledge of good and evil from the first book in the Bible, Genesis. In the 18th century, it began to be illuminated by candles which were ultimately replaced by Christmas lights after the advent of electrification. The modern Christmas tree is frequently traced to the symbolism of trees in pre-Christian winter rites, wherein Viking and Saxon worshiped trees.  A later folk version of the story adds the detail that an evergreen tree grew in place of the felled oak, telling them about how its triangular shape reminds humanity of the Trinity and how it points to heaven.

Modern Christmas trees originated during the Renaissance of early modern Germany. Its 16th-century origins are sometimes associated with Protestant Christian reformer Martin Luther who is said to have first added lighted candles to an evergreen tree.

The first recorded Christmas tree can be found on the keystone sculpture of a private home in Turckheim, Alsace (then part of Germany, today France), dating 1576.

On Christmas Eve, it’s common that no meat (and also sometimes no dairy) is eaten: it would be a form of respect for the birth of the Messiah (while at Easter, a form of respect for his death). Often a light seafood meal is eaten and then people go to the Midnight Mass service. When people return from Mass have a slice of Italian Christmas Cake called ‘Panettone’ which is like a dry fruity sponge cake and a cup of hot chocolate!

The Christmas celebrations start eight days before Christmas with special ‘Novenas’ or a series of prayers and church services.

Epiphany is also important in Italy. On Epiphany night, children believe that an old lady called Befana brings presents for them. The story about Befana bringing presents is very similar to the story of Babushka.

Children put stockings up by the fireplace for Befana to fill. In some part of Italy, the Three Kings might bring you present rather than Befana. And also on Christmas day Baby Jesus rather than Babbo Natale (Santa Claus) might bring them some small gifts. Back in the old days, it was just the Befana that brought gifts to children while, today, Babbo Natale brings gifts and the Befana sweets and chocolates if the child has been good and carbon if not.

In the UK, families often celebrate Christmas together, so they can watch each other open their presents!

Most families have a Christmas Tree (or maybe even two!) in their house for Christmas. The decorating of the tree is usually a family occasion, with everyone helping. Christmas Trees were first popularised the UK by Prince Albert, the husband of Queen Victoria. Prince Albert was German, and thought that it would be good to use one of his ways of celebrating Christmas in to England.

Holly, Ivy and Mistletoe are also sometimes used to decorate homes or other buildings.

Most villages, towns and cities are decorated with Christmas lights over Christmas. Often a famous person switches them on. The most famous Christmas lights in the UK are in Oxford Street in London. Every year they get bigger and better. Thousands of people go to watch the big ‘switch on’ around the beginning of November.

Like a lot of countries, Nativity Plays and Carol Services are also very popular at Christmas time. 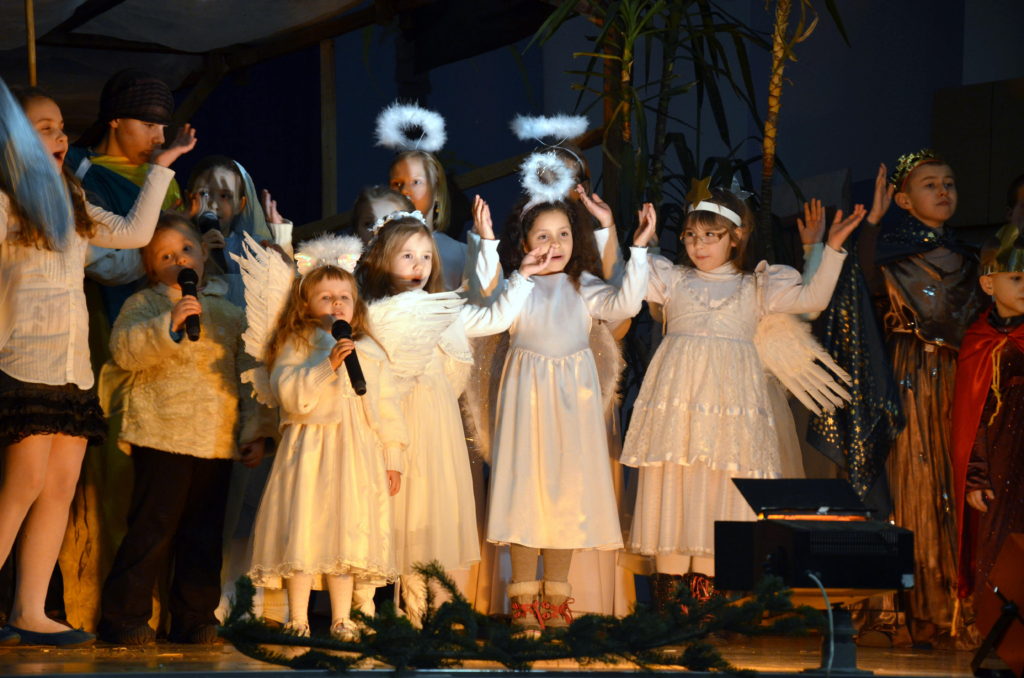 Children believe that Father Christmas or Santa Claus leaves presents in stockings or pillow-cases. These are normally hung up by the fire or by the children’s beds on Christmas Eve. Children sometimes leave out mince pies and brandy for Father Christmas to eat and drink when he visits them. Now, some people say that a non-alcoholic drink should be left for Santa as he has to drive!

There are some customs that only take place, or were started, in the UK. Wassailing is an old anglo-saxon custom that doesn’t take place much today. Boxing Day is a very old custom that started in the UK and is now taken as a holiday in many countries around the world.

In the UK, the main Christmas Meal is usually eaten at lunchtime or early afternoon on Christmas Day. It’s normally roast turkey, roast vegetables and ‘all the trimmings’ which means vegetables like carrots & peas, stuffing and sometimes bacon and sausages. It’s often served with cranberry sauce and bread sauce. Traditionally, and before turkey was available, roast beef or goose was the main Christmas meal. One vegetable that is often at Christmas in the UK are brussel sprouts. Dessert is often Christmas Pudding. Mince pies, lots of chocolates and trifle are often eaten as well!

Do you have different traditions in your region/province? Let us know in a comment!